On October 1st, 2012, the USA FDA introduced MDUFA III (Medical Device User Fee Amendments), which implemented new regulations for the registration on medical devices. While it is expected that the FDA will revise regulations at the beginning of the fiscal year, some of the more challenging items regarding submission, such as RTA (Refuse to Accept) and eCopy procedures, did not come into effect until January 1st, 2013 through separate legislation.

One of the most difficult changes to navigate was regarding Class III medical devices. MDUFA III required that most Class III devices be either reclassified as Class II or require a PMA (Pre-Market Approval), which requires a clinical study that may cost upwards of USD $250 000, and can take more than a year to complete.

Since the Amecath device is implanted in the patient as a long-term treatment, the device must be classified as a Class III risk device under FDA regulations and could not be classified down as Class II. In addition, it belongs to a family of Class III catheters and carries with it a repair kit, which in other cases would be submitted separately for FDA approval.

Arazy Group consultants attempted to overcome the challenges presented by the PMA for Class III devices by developing a regulatory strategy that followed the 510k regulatory pathway, which had also recently undergone changes in the new FDA legislation. To accomplish this, a suitable predicate device had to be identified in order for the 510k program to be utilized.

Since AMECO was not modifying a device that had already been approved in the past nor had they previously obtained approval for a device that would be suitable as a comparison for the 510k submission, parallels had to be drawn to a device from another manufacturer. This made the process more complex, since we did not have access to the design or testing information of the device to easily substantiate our claim.

First, Arazy Group developed a regulatory strategy, which included searching the federal register to determine if the device type had to be down-classified or reclassified. In determining the regulatory pathway, it appeared that the 510k program was suitable if substantial equivalence to an existing, approved device could be demonstrated. Without identifying such a device, a costly and lengthy PMA submission would be required.

Once a suitable device was identified, a substantial equivalence comparison to the predicate device had to be demonstrated based on limited knowledge of the predicate device. From this information, the 510k summary was created to analyze risk. The application included performance testing, biocompatibility, labelling, etc. and was submitted according to eCopy guidelines, which require a very specific format to a PDF document on a disc.

Submission went through the RTA review and then into substantive review. The reviewer assigned to the submission was able to conduct an interactive interview via phone calls and email, rather than through the document control centre. This expedited the review process substantially. After a few days of interactive review, the device was cleared and a 510k clearance letter, which is similar to an approval letter, was issued.

The Amecath device was cleared in four months with the interactive review process. The FDA clearance for this device has enabled the AMECO to submit application in many other markets, including Argentina, Brazil, and China. Through Arazy Group, AMECO is able to utilize the service LICENSALE.COM™, which will enable multiple submission in multiple markets, simultaneously. This will significantly reduce time-to-market and cost and expedite approvals in over 80 markets worldwide, according to the needs and requests of the client.

The Amecath device is innovative, constructed from materials of the latest development. It is one of the few dialysis catheters that comes with a comprehensive kit for real-time repairs for the most common adverse events. The inclusion of the repair kit with the device allows medical professionals immediate access to sterile medical equipment such as introducer needle, guide wire, dilator, and other critical components that may be required unexpectedly, without delaying the procedure. 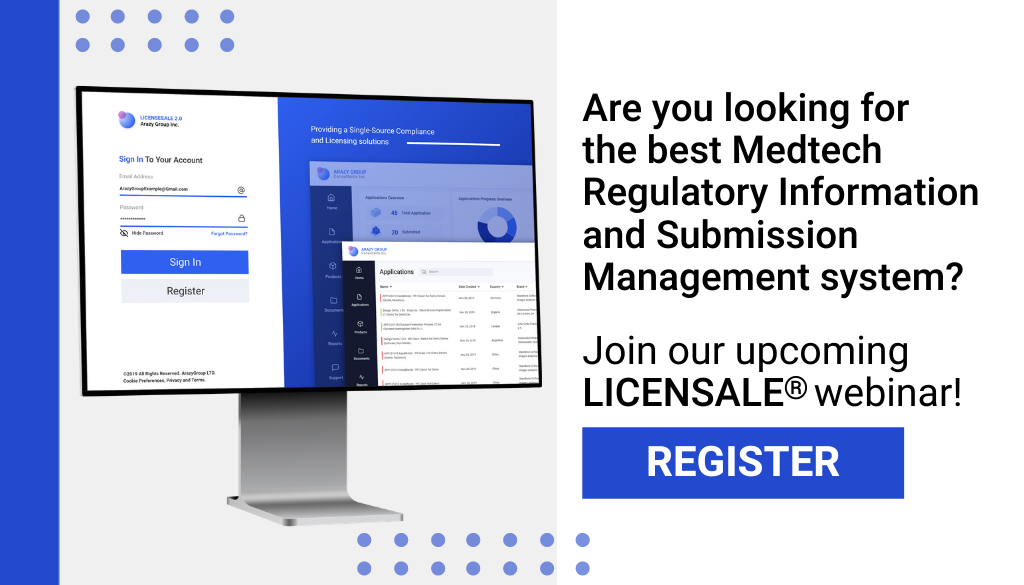